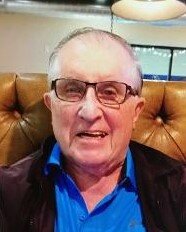 Please share a memory of Michael to include in a keepsake book for family and friends.
View Tribute Book

Please click on the link below for the livestream of the 10:00 AM Funeral Mass at Our Lady of Lourdes Church on Monday, January 9, 2023

Michael C. Corcoran Sr., 81, of West Caldwell, passed away peacefully on January 3, 2023 surrounded by his loving family.  He was the beloved husband of 57 years of Catherine E. Corcoran (nee Boland), and devoted father of Michael C. Corcoran, Jr. and his wife Carol, Daniel P. Corcoran and his wife Colleen and loving "Grandpa, "Pops", and "Poppy" to Michael, Ryan, Kelly, Jack and Kevin.  Michael is also survived by his sister, Doreen Henry (Ireland) and many nieces and nephews both here and in Ireland.  He lived in Irvington and Union for many years before moving to West Caldwell ten years ago.

The son of Patrick and Lauretta Corcoran (nee Shanley), Michael was born in Sheepwalk Frenchpark in County Roscommon, Ireland.  He emigrated to the United States in 1961 and lived with his brother Martin ('Joe") and his wife Mary in the Vailsburg section of Newark until marrying the love of his life, Cathy in 1965.  He was a proud Irishman who loved America.  He was the epitome of the American Dream and became a proud U.S. citizen with his best friend Gene O'Neill in 1968.

Michael worked for Local 68 IUOE for over 50 years, retiring as Chief Engineer at the Legal Center in Newark.  Even in retirement, he was a meticulous gardener who loved landscaping and design.  He was a diehard New York Mets fan since their inception in 1962 and a loyal supporter of County Roscommon's Irish Football teams and was a great footballer in his own right playing for their minor team in Ireland.  However, his greatest joy was spending time with family, traveling, and watching his grandchildren growing up and playing sports.

Michael was a member of the Giblin Association, Cryan Association, Ancient Order of Hibernians (Division 9), County Roscommon Society of New York and a former District Leader for the Union County Democratic Committee.

He was predeceased by his sister Maura Walsh, and brothers; Martin (Joe) Corcoran, John (Sean) Corcoran and Cyril Corcoran

In lieu of flowers, donations can be made to the John Theurer Cancer Center, Oncology Clinical Research, 92 2nd Street, Hackensack, NJ 07601.

The family would like to thank Dr. John Conti and his staff at the New Jersey Cancer Center for their outstanding care and compassion throughout Michael's courageous battle with pancreatic cancer.

Share Your Memory of
Michael
Upload Your Memory View All Memories
Be the first to upload a memory!
Share A Memory