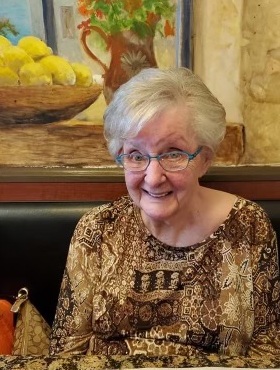 Please share a memory of June to include in a keepsake book for family and friends.
View Tribute Book

Visitation will be held on October 23, 2022 from 2 to 6 PM at the Dangler Funeral Home of West Orange, 340 Main Street West Orange, NJ 07052, with funeral services at 5:30. In lieu of flowers, donations may be made in June’s name to: The Community Food Bank of NJ, 31 Evans Terminal Hillside, NJ 07205. Letters of condolence may be posted at www.danglerfuneralhome.com.

June was born and raised in Irvington, the only child of the late Harry and Cecelia Dirgo, then lived in Belleville, before moving to West Orange in 1973. She worked as a front end manager at Pathmark in West Orange and Marshall’s in East Hanover before retiring in 2007.

June was the devoted mother of Linda Reitberger, Catherine Perna & her husband Leonard, James & his wife Cindy, June Reitberger, and Thomas. Cherished grandmother of Jennifer, Leonard III & his wife AnnMarie, Anthony & Luz, Dillon, and Bryan. Loving great-grandmother of Massimo, Giuliana, and Lorenzo. Dear sister in law, of Lois Gaglione. June is survived by many nieces and nephews and cherished friends who she considered family. She is predeceased by her children, John, Robert, Patricia, Harry, Susan, and Michael. She is also predeceased by her grandson James Reitberger.

Share Your Memory of
June
Upload Your Memory View All Memories
Be the first to upload a memory!
Share A Memory