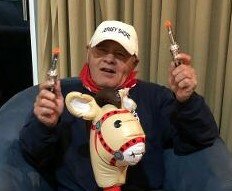 Get Directions
Tuesday
24
May

Get Directions
Wednesday
25
May

Please share a memory of Robert to include in a keepsake book for family and friends.
View Tribute Book

Robert “Bobby” Skokandich,71,  passed away on May 20th with his family by his side.

Bob was born in Jersey City, NJ on April 10, 1951 and raised in North Bergen. Bob resided in West Orange from 1986-2016 and moved to Toms River after retiring as a utility worker from Suez Water Company after 35 years of service.

Bob always had their dog Bella by his side when he would take his bike rides through the neighborhood.  He loved making people laugh and always had a story to tell. He was famous for his butter cookies and always made sure his family and friends got some during the holidays.  He was a devout Yankee and Giants fan. Bob is survived by his wife Patti, sons Steven and his wife Angela, Kevin and his wife Samantha, grandchildren Cameron, James, Sophia, and Charlotte. Brother Ronnie and his wife Maggie, sister Kathy, sister in law LuLu, and several nieces and nephews.

A Funeral Mass will be offered on Wednesday, May 25, 2022 at 11:00 AM at Our Lady of Lourdes CHurch, 1 Eagle Rock Ave. in West Orange. Cremation will be private.

Share Your Memory of
Robert
Upload Your Memory View All Memories
Be the first to upload a memory!
Share A Memory