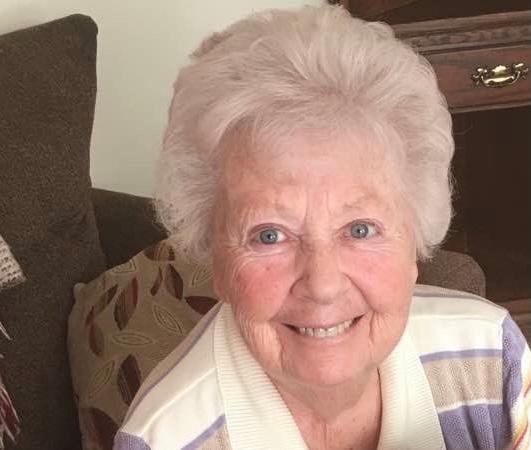 Joan Thelma Koch (nee Foss), 87, a lifelong resident of West Orange, New Jersey, died with her daughters at her side on February 8, 2021.  Joan, daughter of Olaf and Marie Foss (nee Costello), and wife of the late Honorable Conrad N. Koch, who predeceased her in 1997, was born in Newark, NJ, on August 3, 1933, and grew up in Belleville, NJ.

Joan graduated from Belleville High School and worked as a secretary prior to marrying Conrad. For a time, they lived in Boston where Conrad was stationed in the Army.  Joan and Conrad then relocated to West Orange, New Jersey, where Conrad began his law practice and Joan stayed home to raise their two daughters, Kathleen Mary and Lesleyanne Marie.  Joan was a truly wonderful and devoted mother to her daughters, providing unconditional love and support to them all of their lives.  Joan was also a loyal parishioner of Our Lady of the Lake Church in Verona all her life.

As her daughters grew older, Joan went back to work and proudly served as a medical secretary for multiple doctors in the OBGYN Department, and later Pathology Department, at the University of Medicine and Dentistry of New Jersey, until retirement in 1999.  With her remarkable vocabulary, Joan was a true asset to the doctors for whom she worked in facilitating medical information into documents and materials to be more widely understood.  Joan was also known for her reliable and sound work-ethic, ever pleasant and professional attitude, and as a supportive team player to the many co-workers who adored her.

After retirement, Joan focused on being a devoted grandmother to her three grandchildren, Constance Nichole, Faith Julianna, and Joseph Dylan.  Joan was often seen with them taking on adventures to New York City, Broadway, the Jersey Shore, museums and the Turtle Back Zoo.  She also enjoyed travelling abroad to Ireland, Mexico, taking Caribbean cruises and finding any beach to enjoy the calming waves, sand in her toes, and warm sun, with her family.  Ahead of her time, Joan believed in holistic medicine, and spent time educating herself on various aspects of holistic living.  Joan’s Catholic faith was important to her, and she pursued religious education through a variety of adult religious programs through both Our Lady of the Lake and Our Lady of Lourdes Churches.  Joan was also an avid animal lover, caring for her beloved dogs and donating to various animal protection organizations.

In recent years, Joan went to live with her daughter, son-in-law, and grandchildren, in Fairfax Station, Virginia, and enjoyed precious time spent with family, trips to the Virginia wineries region, and taking scenic drives around D.C. and Northern Virginia.

Joan is survived by her daughters Kathleen Mary Price and her husband Gene Price of Hollywood Beach, Florida; Lesleyanne Marie Koch Kessler and her husband Kenneth Kessler of Fairfax Station, Virginia; 3 grandchildren who were the lights of her life, Connie, Faith and Joseph; many nieces, nephews, and cousins who she loved dearly; her sister-in-law Dorothy DeLigny, and many loving friends near and far.

A Funeral Mass will be offered on Tuesday, February 16, 2021 10:00 AM at Our Lady of the Lake Church, 32 Lakeside Ave. in Verona. Interment will follow at Holy Cross Cemetery in North Arlington.

During the COVID 19 pandemic, all persons entering the Funeral Home will be required to wear a face mask or face covering throughout their stay. Likewise, all social distancing rules must be adhered to. Gathering together in groups should not happen. A continued flow throughout the facility will aid in keeping all of us safe, with everyone having an opportunity to pay their respects.

Share Your Memory of
Joan
Upload Your Memory View All Memories
Be the first to upload a memory!
Share A Memory