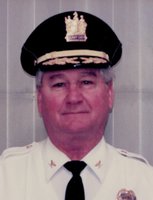 Ron was born in Orange and was a lifelong resident of West Orange. He retired as a Deputy Chief of the West Orange Police Department. Ron joined the department in 1963, rising to the rank of Deputy Chief in 1990. Prior to that he was a West Orange Fireman from 1962 to 1963.  Ron proudly served in the Army National Guard as a Major. He was a Past President and Trustee Emeritus of the Essex Troop 102nd Battalion, a 1954 West Orange High School graduate,  and a member of the West Orange Superior Officers Local #25.

Ron was the beloved husband of 65 years to Elizabeth Fahey (nee McLoughlin).